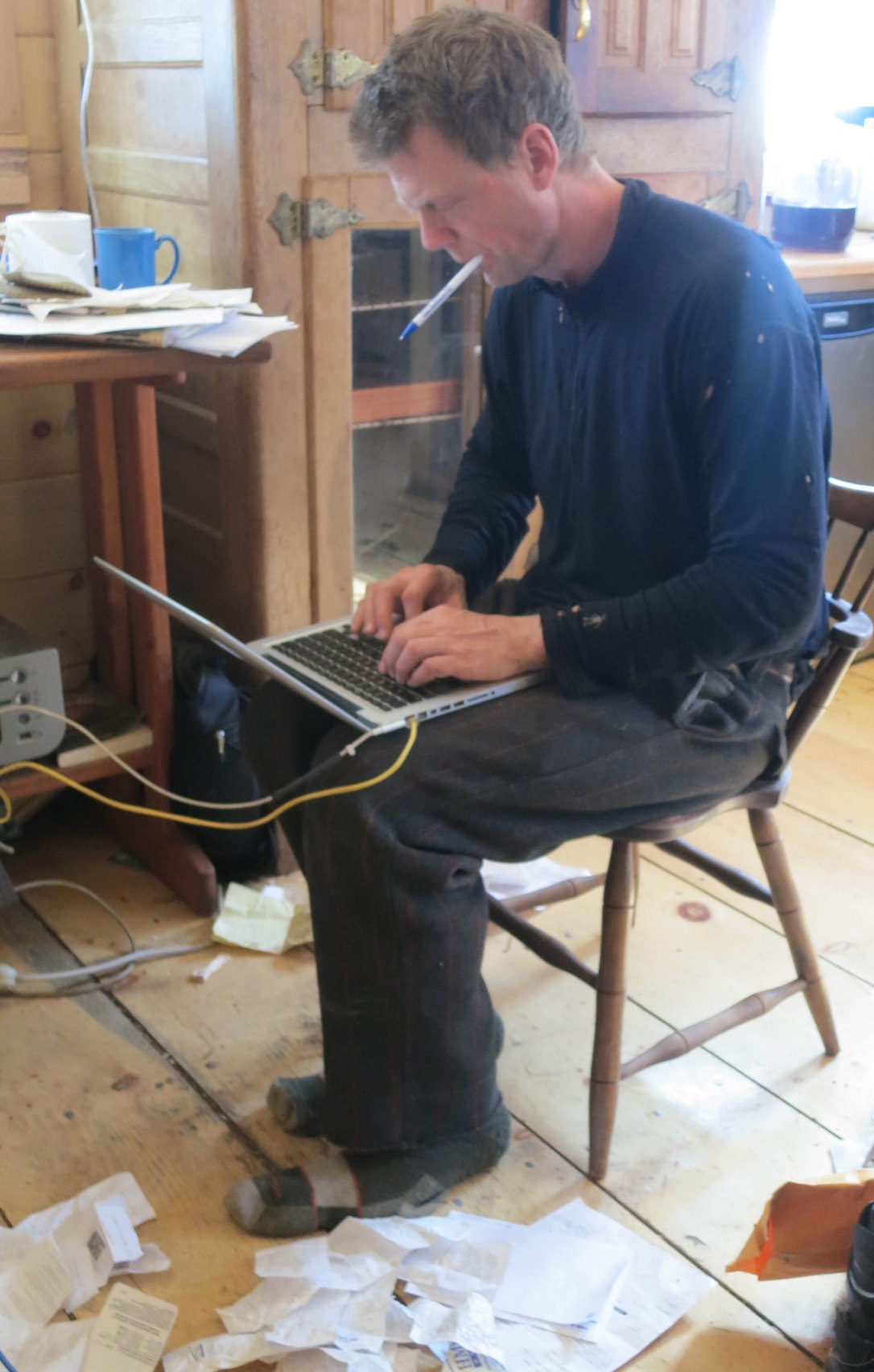 Doing taxes. As you might imagine, I am thrilled to support the proposed expansion of our fighting forces, along with the gutting of the arts and numerous programs that support the most vulnerable and marginalized among us. Oh, and the wall, of course, in both its literal and figurative manifestations.  Sometimes I can’t help but imagine what we could accomplish if we weren’t so damn scared all the time. Now back to our usual programming:

Another drive, another hitchhiker, this one younger than the last, pear-shaped and out-of-breath, hands scrubbed so pink I couldn’t stop looking at them. He worked third shift at a mental health facility, but was on his way to a mid-day meeting. He’d worked the night before, grabbed an hour of sleep before sticking his thumb out, and was scheduled to work the night approaching. “It’s a good job,” he said. I understood then that the softness of his physique cloaked an inner strength, and I was glad I’d picked him up.

Later, in the almost-evening, I helped my younger son at the barn where he and his brother – on this day, at home sick – do chores twice weekly. The farmer had dehorned the heifers that afternoon, and the surrounding walls were streaked with blood, it ran down the animals’ faces in rivulets, dripped thickly onto the bedding below. The cows lapped grain off the concrete floor, 30 of them lapping and chewing in unison, a beautiful sound, almost meditative, and I knew I’d heard that sound before, not just in the barn, but somewhere else, too. Then, finally, I placed it: Rain on a tin roof. How strange.

On the drive home, the car thick with the smell of shit and hay and blood, the boy and I ate ice-cream sandwiches. Darkness was coming and snow began to fall. 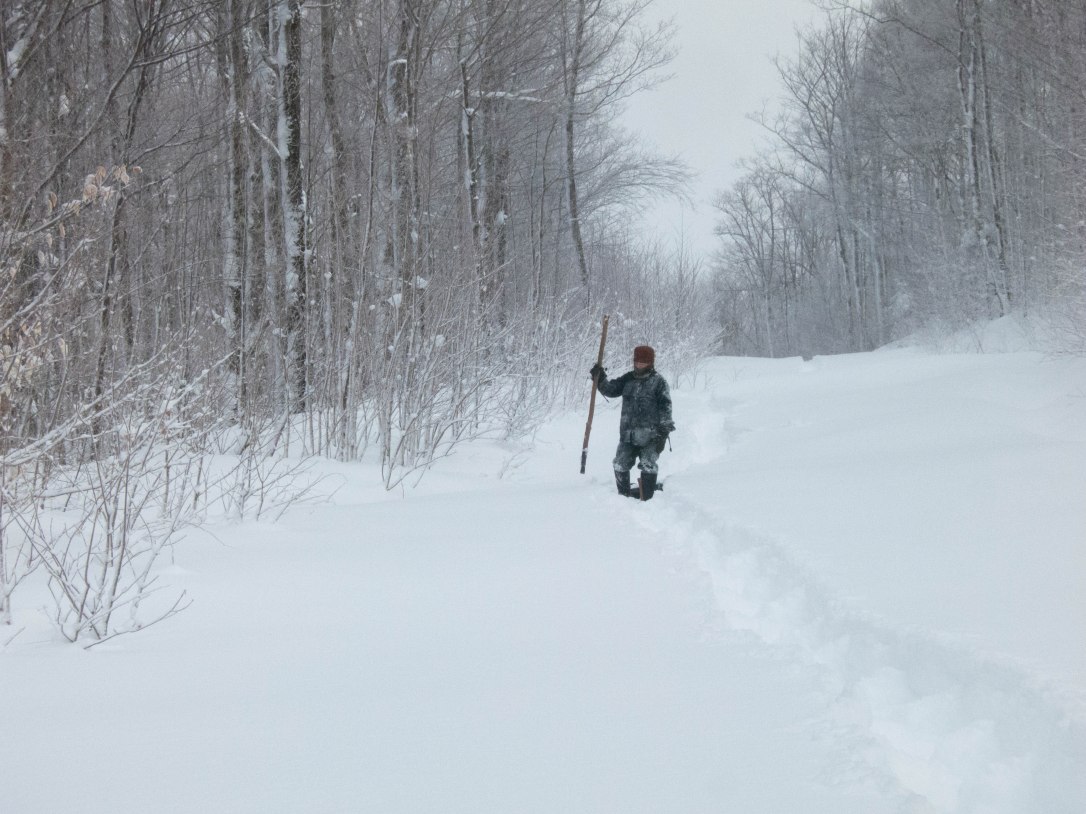 Driving westward yesterday afternoon, the sun sweet on my face through the windshield, on my way to pick up a carload of used sap buckets, I picked up a hitchhiker. It is my rule to pick up hitchhikers; I think the world would be a better place if more people hitched, and if more people invited strangers into such intimate space. For is this not a basis for empathy? And do we not suffer a cultural deficit of empathy? I think it is and I believe we do.

The fellow I picked up looked a little rough around the edges. He carried the yeast-y smell of one who drinks with frequency; it hit hard the moment he opened the door. There were tattoos on his hands, something in script, poorly done and faded, simple blue ink. I tried to make out the words but could not. He was headed for a town near where I was born, and where my parent still hold title to a piece of land. He was going to visit someone he referred to as his “lady friend.”

“It’s a long ways to walk for a piece of ass,” is what he said, and I pointed out that at least now he wouldn’t need walk the entire distance, since I’d be dropping him a good twenty miles nearer to sexual gratification, if indeed he was actually sober enough to experience such by the time he arrived. Truthfully, the longer we talked, the less likely this seemed. Maybe I should have pointed out the exploitative nature of his comment, but I didn’t, and maybe that makes me complicit. I don’t know.

We didn’t talk about much of consequence. He told me about his kids, about the job he used to have working on a horse farm, about how he makes extra money harvesting chaga, about his pending divorce, about the recent storm, and so on. Small talk. He sat leaned over a bit, one hand against his side, as if something pained him.

I dropped him where my path diverged from his, and watched in the rearview as he walked through the juncture of the two roads. He’d told me he travels this route often; he knew he had exactly 19 miles to go. He claimed he’d walked those entire 19 miles a time or two, but I didn’t know whether or not to believe him. Could anyone really not get a ride in 19 miles of highway?

I thought about the last time I hitched, just last summer, actually. The truck’s alternator crapped out, and I had no phone, so I stuck out my thumb and in about two minutes a huge Dodge Ram pulled over, all black, tinted windows, thumpy exhaust, the whole nine. I hopped in and the driver had the gas to the floor before I even had my ass on the seat. Lit those tires right up. He was maybe 45, 50, and was grinning hugely, eyes twinkling like he and I were accomplices to something that was just on the edge of being wrong, and I had to laugh. He took me out of his way to drive me right to my doorstep. 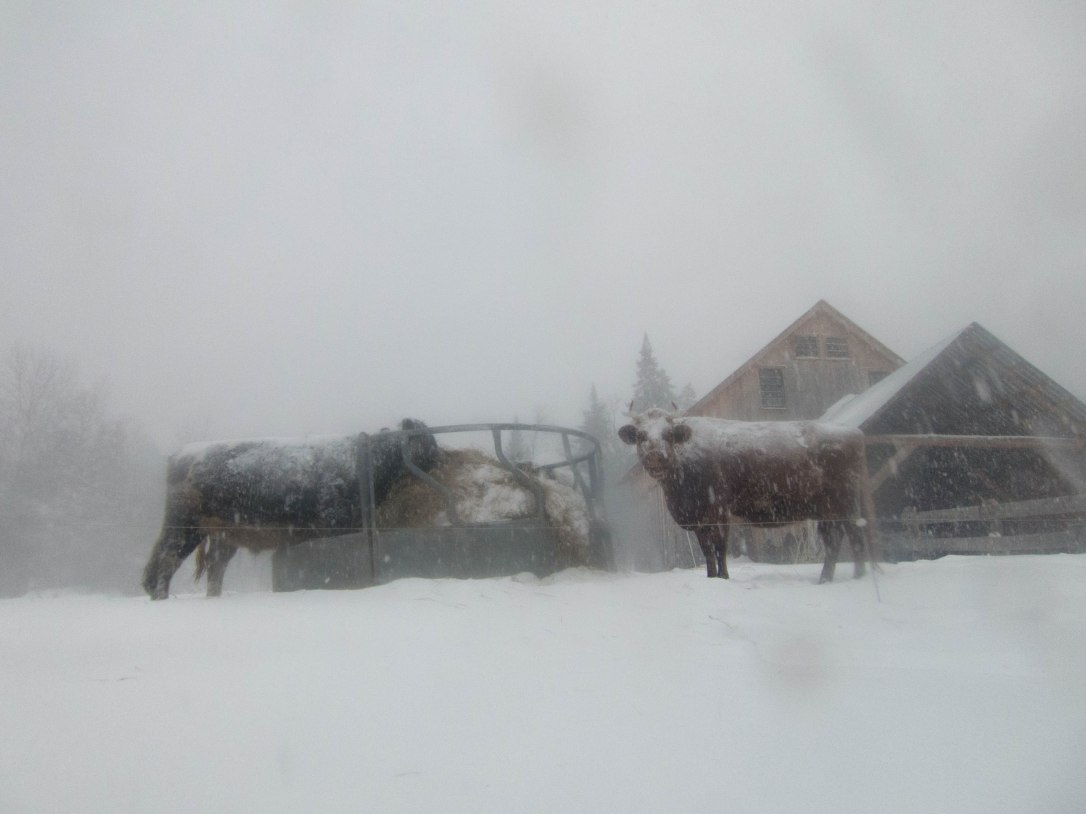 The storm was impressive, three straight days of snow in waves of varying intensity and duration. By the time the sky cleared, I’d plowed the driveway four times, and our foot travel had become restricted to prescribed paths. Even on snowshoes, we sink deep.

Yesterday I skied the perimeter of our property; it was cold enough, but the high March sun had turned the top layer sticky, and I stopped no fewer than a half-dozen times to scrape the bottoms of my skis against the rough bark of a spruce or maple to remove the accumulated snow. It was frustrating, and more than once I thought of turning back, but my old body still knows a thing or two, and yesterday it knew it needed sun, and sweat, and, in the handful of minutes between scraping clean the bottom of my skis and the re-accumulation of snow, that ethereal feeling of gliding through the forest. Of being carried, almost.

It’s strange to be thrust back into winter this late in the game, particularly after so many mild weeks. I think about the deer; only a few days ago we watched them graze the south-facing, snow-bare field across the cleft of the mountain road. Our younger son took off one afternoon to see how close he could get; he counted 20. The shift in weather must be disorienting to them, too, the does fat with spring fawns, hungry as any of us for something green.

It’s been cold, startlingly so, and until yesterday the wind was relentless. Now we await an impending storm that’s forecast to bring as much as two feet of snow and still more wind. It’d been an unremarkable winter until this snap; funny how a late-season taste of cold and snow can color the entire season. Suddenly, winter seems long and hard.

The cold has been good for pulling firewood, and we’ve amassed an impressive pile. It’s long been my ambition to stockpile two years worth, but like too many of my ambitions (six pack abs, four hour work week, financial independence, master Hot For Teacher on the guitar), it’s a goal perennially deferred. But this year, I think we’re going to make it, or close enough to claim it so within the margins of reasonable exaggeration. Wood is our sole source of heat and hot water, along with our primary cooking fuel, and for us there’s security in firewood, or at least the illusion of security, and since illusion is all any of us ever get, I’ll take it.

At our previous property, we burned a lot of “B grade” hardwood – red maple, mostly, and good bit of white birch. Here, we have access to an embarrassment of riches: Sugar maple is the primary hardwood species, but also some beech, a bit of black cherry, and lots of apple culled from the long-abandoned orchard. And still some white birch, which maybe isn’t the best from a BTU standpoint, but which I love for its papery bark, a built-in fire starter. Lately, we’ve been burning lots of spruce clapboard scraps, too, and while I’m very much looking forward to finishing the siding (at the rate we’re on, I’m figuring fall of ’21), I’ll sure miss the tinder-dry scraps.

I think I might’ve mentioned this once before, but I’ll never forget reading a historical non-fiction book to the boys about the colonists, and how they burned 50-70 cords of firewood per year (we burn about five). It’s an astonishing amount, unfathomable to me, and made all the more so to realize they had no tractors, nor chainsaws. It must have been all-consuming and exhausting, though I suppose it beat freezing to death by a pretty wide margin.

I guess I don’t have much else to say; I keep thinking I’ll come up with something more meaningful to share, but the days come and go and come again in a flurry of activity, and nothing really comes to mind. Life of the hand, life of the mind, as Will likes to say. I guess I’m in a hand phase.

Oh, and for those of you who are interested, we’ve been posting some photos over here. 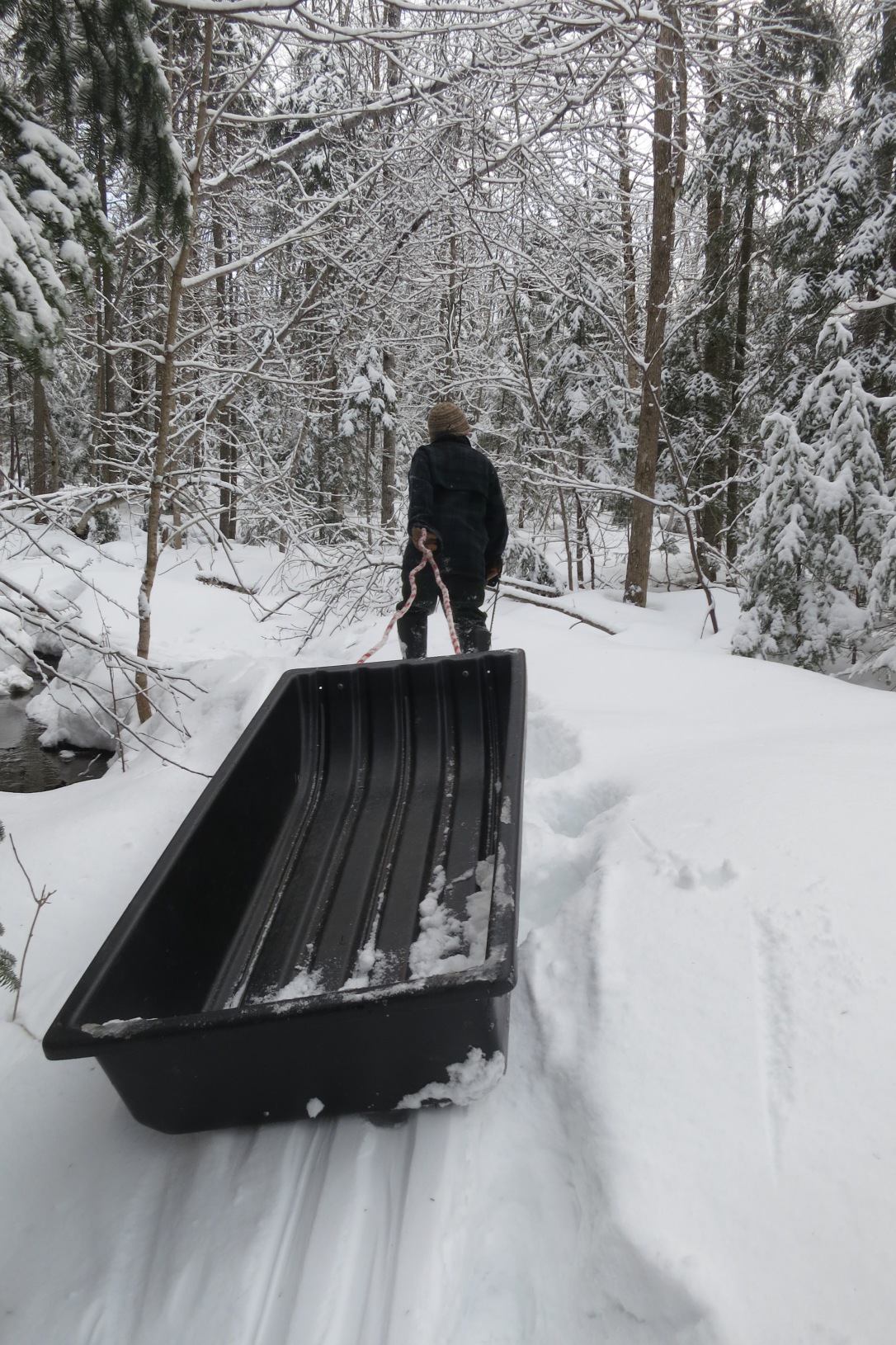 Into the woods, on the hunt for Black Ash

The cold settled yesterday, slowly, stealthily, and by this morning it was a hammer blow to my face as I scurried from chore-to-chore, the wind buffeting the collar flaps of my jacket and driving spindrifts of new-fallen snow across the ground before relenting briefly to allow for dispersement and settling. Then another gust, the snow scuttling once again.

How cold was it? I cannot say, but very – the tractor barely chugged to life, and it’s generally good to about ten below – and besides, it wasn’t the cold so much as the wind, persistent and foul-tempered, like a herding dog at the ankles or a spoiled child in a toy store. Never satisfied no matter how much is offered.

I have been working on a number of other projects, both personal and professional (ha! Funny to use that word in relation to my work), and not writing so much in this space. And then when I do, not really sure what I want to say. Or worse yet, even when I know what I want to say, unsure of how to say it. The age old curse of this stone-turning work. So I thought I’d just share a few things. First, I think you should all watch this documentary. This one, too, which is quietly charming, and pretty short, if you’re pressed for time. And that accent! Music: Shakey Graves. And this one from The Dead South sure is a heel-tapper.

There was an error retrieving images from Instagram. An attempt will be remade in a few minutes. 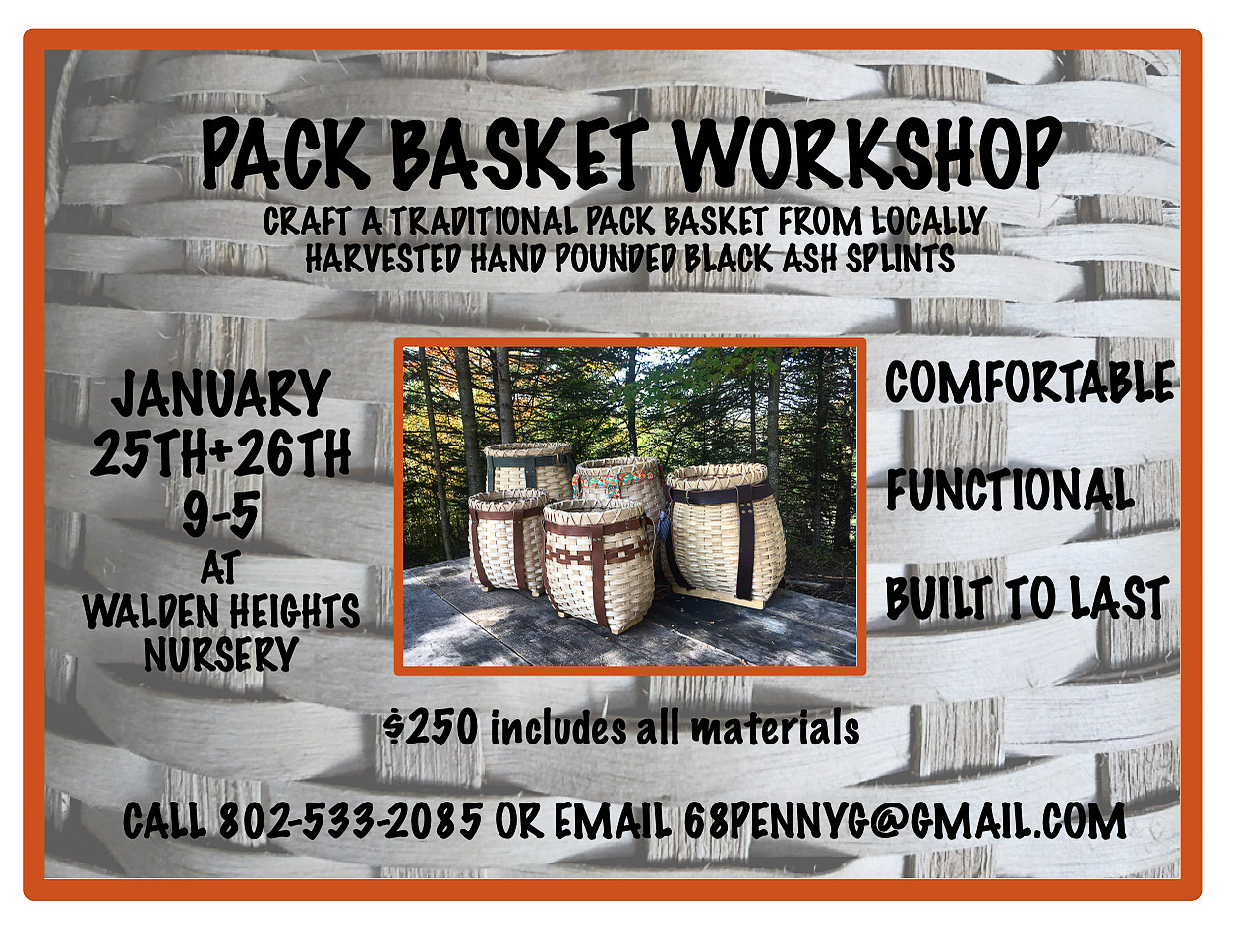