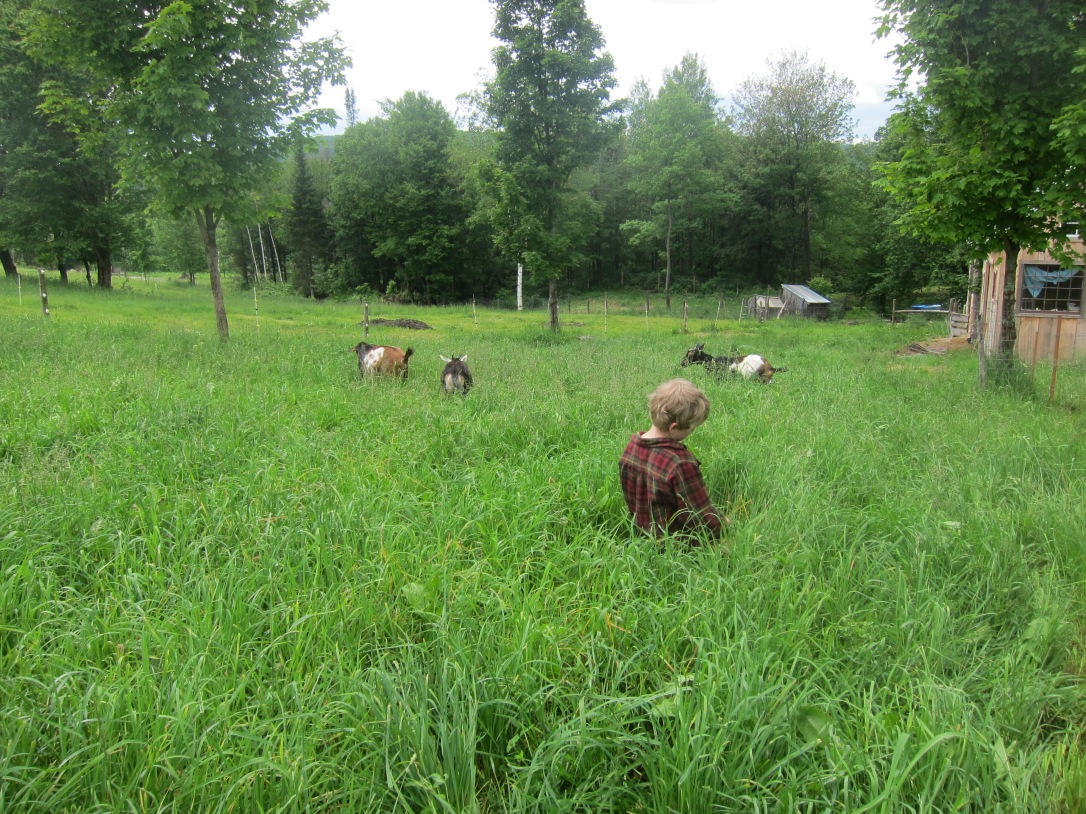 A couple days ago, some folks stopped by. They’re not from around these parts, as the saying goes, but they’re looking for property in the area, and are having a heck of a time finding a place that meets their needs. Or fits their expectations. Which of course are not necessarily the same thing. Anyway, it seems as if every property they’ve looked at involves compromise in one form or another.

It got me thinking about how we landed here. Which, I have to say, was pretty much by default. We’d been looking for land for a year or more, and it had been a rather dispiriting process, what with our meager resources (we had all of $15k to our names) and our desire to inhabit a piece of land suited to small scale growing and general romping about. This was 16 years ago, so $15k wasn’t as meager as it sounds today, but still… it weren’t terrible much even at the time. As such, Penny and I kept getting dragged across one sopping wet 5-acre cedar swamp after another, with realtors babbling on about “potential” and “promise.” Yeah, right, whatever.

Anyhow, after a solid 12 months of this, we stumbled across a for-sale-by-owner ad in one of those free local papers that’s mostly ads for used car dealers and Dunkin’ Donuts promotion-of-the-week. The land advertised wasn’t in one of our towns of choice, but the description was compelling, and the price was exactly on the outer limit of what we could afford with the 50% down payment banks typically require for bare land purchases. As I’ve written before, we made an offer the same day we looked at it.

What’s interesting to me is how many of the aspects of our property that we first perceived as deficient, have become beloved. The hills, for instance: Our entire property slopes westward, with hardly a piece of ground level enough to accurately check the oil in our car. It is true that for optimum efficiency in growing, flat land would be preferable. But the sloping and undulating nature of our land has become one of our most-favorite things about it. There is a sense of energy to it; it is dynamic and flowing, with little hummocks scattered about so that there is always a view that can’t quite be realized from wherever one stands, but is near enough to being revealed that it beckons you forward. These same characteristics – slope and undulations – also mean that our property is home to numerous microclimates, which we are slowly learning to leverage for growing species that are not entirely suited to this region. This summer – thus far one of the wettest, if not the wettest, on record – we haven’t had to deal with any flooding, because once the soil becomes saturated, the pitch of our land carries the rain water into the valley below. Every day, I hump it up the hills of our pasture carrying bags of chicken feed, or reels of fencing, or a chainsaw, and I feel my heart thumping and the sweat on my brow, and I know I am lucky for the effort, that it may end up adding years to my life. Either that, or I’ll drop  dead of a heart attack in our pasture someday. Which wouldn’t actually be such a bad way to go; Penny and the boys could just dig a hole on the downhill side of me and give a little shove.

I could go on, but I suppose my point is this: We did not buy our ideal piece of property. We bought a piece of property that we could afford, and that despite its deficiencies, spoke to us. It wasn’t so much that we walked this land and thought that maybe we could make it work; it was that we walked this land and knew we’d found what we were looking for, despite the fact that it really wasn’t exactly what we were looking for. If that makes any sense.

It’s been a decade-and-a-half since we moved onto this land, and I often think about how profoundly this property has shaped our lives in ways that are utterly unique to it. To be sure, we have done our share of shaping – dug a pond, cleared for pasture, built a house – but I suspect the land still wields the greater power. For whatever reason, this is comforting to me.

The truth is, the land leads. We just follow.

10 thoughts on “The Land Leads”